A Threat to the Nature Reserve

We strongly oppose the council plans to build on Rookwood Golf Course as the Rookwood development will undoubtedly damage the Reserve.

FOWNR have written an open letter to Horsham District Council. Read the letter.

Please help us take action to stop this development. Read on to find out what you can do.

A Summary of the Threat

As HDC have pushed out their timetable for finalising the Local Plan, there is still time to lobby councillors before they vote on the final content.

In mid June the Friends sent individual letter to all 48 HDC councillors urging them to preserve Rookwood as a green space (click here to see a copy). Rather disappointingly, after 2 weeks, we have only received replies or acknowledgements from 11 of them.

While there is still time, please take the opportunity to oppose this very real threat to our wonderful Nature Reserve by lobbying the HDC councillors.

The Friends continue to oppose the Rookwood proposal. Our position is clear in that we:

The Friends are also represented in the “Keep Rookwood Green Alliance” (KRGA)  which includes the Horsham Society  and Friends of Horsham Park. This Alliance pools local expertise and is rallying support for several options to keep all or part of Rookwood as green space. Please visit their website at www.keeprookwoodgreen.org

We would encourage you to support the Reserve by making your voice heard through any channels possible, including the following: 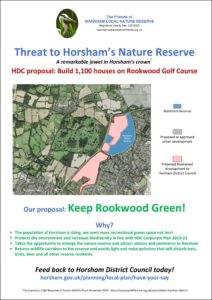 HDC have put forward a proposal to include Rookwood Golf Course as a site for housing development within the Draft Local Plan.

The Friends believe that such development would be a serious threat to the Reserve, which is immediately adjacent to Rookwood.

We strongly believe that Rookwood should be preserved as  a recreational green space for the benefit of the growing population of Horsham residents, and for the protection of our outstanding Nature Reserve.

Five more of David King’s excellent videos have been added.

Construction of the new Hub finally got underway at the end of March.

If you are missing visiting the Reserve, check out these David King videos for a ‘virtual visit from home.

Due to the COVID-19 pandemic, all events at the Reserve are cancelled until further notice.