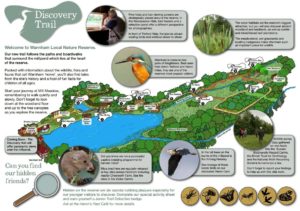 The new Discovery Trail, designed for visitors of all ages, follows the paths and boardwalks that surround the Reserve’s millpond. It is packed with information about the wildlife, flora and fauna that call the Reserve home. There are stories from the site’s history as well as a host of fun facts designed to appeal to all ages.

Our younger visitors have the chance to become ‘Junior Trail Detectives’ by completing the trail, finding six hidden rubbing plates and completing the quizzes and puzzles all aimed at providing a fun introduction to the life on the Reserve and inspiring the next generation to learn about how to protect it.

In addition, the trail includes the two special new sculptures: the Bat Bothy and the Tri-Helix which were both created as part of the Horsham District Year of Culture 2019 ‘Field Notes from Warnham’ project, leaving a lasting legacy of the year of celebrations.

The Discovery Trail forms an initial part of a larger project – the Discovery Hub Project which is being partly funded by the European Agricultural Fund for Rural Development who support investment in public recreational infrastructure.