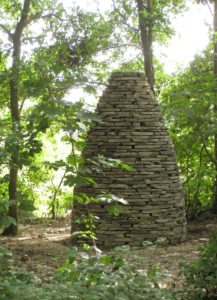 The first of two art installations by artist and sculptor Will Nash has been completed on the Reserve as part of the ‘Field Notes from Warnham’ project for Horsham District Year of Culture 2019.

Called ‘Bat Bothy’, it takes inspiration from the Reserve’s historical association with the Iron industry in the seventeenth century, being based on the shape of a blast furnace of that time, but also incorporates access to the central space for bats to roost in. At 2.8m high it is an impressive edifice! 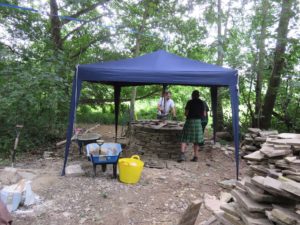 It has been built over a two-week period by volunteers from Horsham Green Gym, HDC Parks and Countryside staff, and members of Friends of Warnham Local Nature Reserve, under the expert guidance of Will. 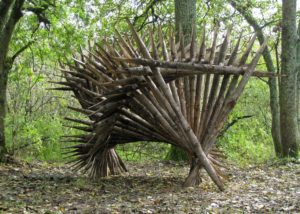 The second of Will Nash’s art installations for the ‘Field Notes from Warnham’ project for Horsham District Year of Culture 2019 has now been completed, again built with the help of volunteers.

This is a wooden structure which takes its inspiration from the incredible shapes of diatoms that can be found in the microscopic world.